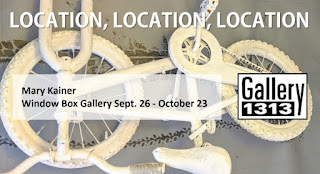 Mary Kainer's work will be in the Window Box Gallery until the end of the month at Gallery 1313, 1313 Queens Street West, Toronto. 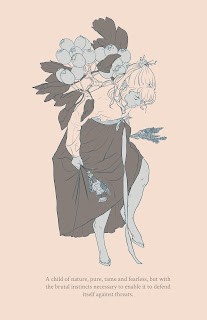 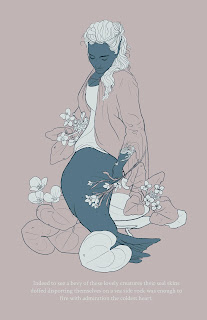 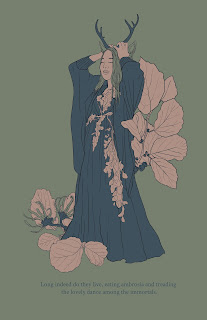 Many of us are curious about the unknown, wonder about all that glimmers in the firelight. Something magical preys on those of us who have wandering minds. This is the place of folklore.

I’ve been fascinated with monsters and magic since I was a young child, as most of us are, but I did not grow up and away from this fairy-tale mind. If anything, I grew more deeply committed to the “enchanted” story as a writer, an illustrator, and a translator of the emotions and thoughts.

The satyr, once a lustful, male-dominated mythical creature, is now a wistful spirit who is unregulated by common understandings. She is air.
“A child of nature, pure, tame and fearless, but with the brutal instincts necessary to enable [her] to defend [her]self against threats.”

The selkie, usually a hapless maiden of the sea who is coerced into being a bride, now has agency and inspires awe. “Indeed to see a bevy of these lovely creatures, their seal skins doffed disporting themselves on a sea-side rock was enough to fire with admiration the coldest heart.” She is water.

The dryad, depicted mostly as an object of sexualization in classic media, can now live freely and without the restraints of preconceived notions. She is earth. “Long indeed do they live, eating ambrosia and treading the lovely dance among the immortals.” She is air.

I removed the hypersexualization that plagues these classic stories and gave them room to breathe, space to become all of the things little girls wish they could be. Each one of these creatures, the dryad (modeled by Shirls Shuning), the satyr (modeled by Joyce Jodie Kim) and the selkie (modeled by me), became the embodiment of these reworked ideas and dreams.

This series was born as a semi-collaborative piece for my art collective Carpos Collective’s debut show. Using reference images that we took of ourselves, these posters became modeled after my co-founders and me. The screen-printed versions of the illustrations are a labour of love among the three of us. We worked as a unit in my makeshift studio to print 90+ copies of the art. Inspired by my work, and the folktales that captured their hearts, Shirls and Joyce have created art in response which is also presented at this exhibition.

I hope to work like this more in the future, incorporating the magic of a good story, the curiosity of strange legends, and glimmers of hope and love, into every piece I create.

Posted by WIAprojects at 4:06 PM