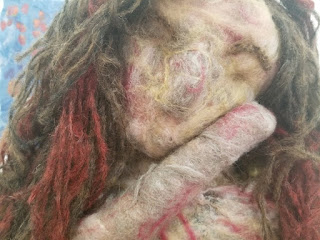 It is said that during the Neolithic age (10,000 BC), there was a 4000-6000 year period of relative peace and stability in matriarchal cultures across Europe, where several goddess figurines have been uncovered, indicating that the feminine was revered as divine. Entitled Mala after the artist's matriarch – her maternal grandmother – the piece shines a light on cultural context and expectations of life-birthing, aiming to mend the dissociation many of us have to the feminine. The felted sculpture is of a pregnant demi-Goddess mother figure, in front of a representation of the fallen woman. The mother figure tends to herself with one hand and holds her belly with the other. The artist wishes to shine a light on motherhood and life-giving, as we find ourselves in the throes of instability on psychological, communal, and political levels, and renewed politicization of women's bodies.

Sarah Katz is a published poet and fibre artist in the start-up phase of a wool-slipper social enterprise. After completing her studies in psychology and English literature, she has endeavoured to help add kindness and playful to the world. Her art touches on existential themes on the psyche, belonging and human worthiness, examining the value of body, heart, spirit in a capitalist context.

Window into Another World

Windows are a divider between one world and the next. One is instinctively drawn to its power and possibility. Is freedom just on the other side? Inside, the traveler makes her way to unknown places. This piece is inspired by Hokusai's landscapes and the paper doll cut outs from my mother’s old activity books.
Erin McKluskey

Born in Ottawa, Erin is an emerging artist and illustrator working in Toronto. With a background in illustration and theatre, she creates images that exist on paper, walls, objects, spaces, and stages. Erin is interested in using imagery as an opportunity to explore the world, our environment and social issues.