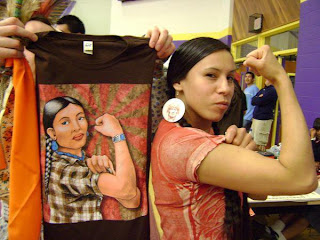 WW 2011 aspires to be a powerful celebration of voices and diversity. As Canada is host to this important event, the meaningful participation of Aboriginal women and the prominence of Indigenous women's issues are essential.

WW 2011 participants should come away with a deeper understanding of Aboriginal women and Indigenous women, and with a recognition of their immense knowledge and leadership as inspiration for a better world. This is why we identified the value of creating an Aboriginal Women's Leadership Circle, a volunteer advisory body comprised of Aboriginal [First Nations, Inuit, Métis] women.

Just as the event's content and program should challenge colonialism and neo-colonialism in its various forms, the internal organizing process should, too. We believe the non-tokenistic involvement of Aboriginal/Indigenous women is vital to feminist organizing and convening.

Working within an Aboriginal worldview, we will collaborate within WW 2011 to be respectful of all people and communities, their perspectives, and their potential contribution to this celebration of voices.

The Circle will advise on the 'who', 'what', and 'how' of recognizing and honouring Indigenous perspectives, experiences, knowledge, culture, and territory within WW 2011. We are here as an all-encompassing, over-arching body to ensure that voices across community, political, social, environmental, arts, and culture sectors and beyond are heard.

The Aboriginal Women's Leadership Circle will work collaboratively and provide leadership to all of WW 2011 to ensure Indigenous women's voices are included at every stage of planning and at the event.

The Circle recognizes the distinctive realities between First Nations, Métis, Inuit, as well as other Indigenous women throughout the world, and will encourage representation from across the globe as well as sharing of knowledge and experiences between generations.

The Circle will ensure the highlighting of Indigenous women's unique and disproportionate experience with globalization.

The Circle will support WW 2011's prioritization of inter-generational sharing and women with disAbilities, and ensure their relevancy to Aboriginal women.

Representing a diverse range of backgrounds, experiences, disciplines, and Aboriginal ancestry, we are collectively committed to being an integral part of WW 2011.

Founding member Claudette Dumont-Smith, from Kitigan Zibi Anishinabeg First Nation territory, is a registered nurse who has worked at the local, regional and national levels on Aboriginal issues for the past 35 years and has held various positions including that of Commissioner on the Indian Residential Schools Truth and Reconciliation Commission.

Mary Sillett has been involved in Inuit/Aboriginal issues since 1976. Positions she has held include President of the Inuit Tapiriit Kanatami, President of Pauktuutit (Inuit Women's Association of Canada), and Commissioner on the Royal Commission of Aboriginal Peoples.

Tina Keeper of Norway House Cree Nation in Manitoba is an actor, producer, researcher, communicator, and former Member of Parliament.

Jessica Yee is a Two Spirit Indigenous feminist activist from the Mohawk nation. She is the founder and Executive Director of the Native Youth Sexual Health Network which works across North America in the full spectrum of sexual and reproductive health by and for Indigenous youth.

Erin Konsmo is a young Métis from Red Deer, Alberta. Both a social justice entrepreneur and compassion activist, she is currently a community-based researcher for Aboriginal HIV/AIDS and works internationally with a variety of development organizations.

Alanis Obomsawin of the Abenaki Nation has created over 30 uncompromising documentaries with the National Film Board of Canada (NFB) that chronicle the lives and concerns of First Nations people. Her work has been recognized with numerous awards, including the Governor General's Performing Arts Award for Lifetime Artistic Achievement.

For more information on the WW 2011 Aboriginal Women's Leadership Circle, please email circle@womensworlds.ca
Posted by WIAprojects at 8:37 AM 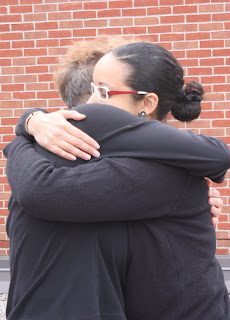 “I know what I used to think of it as, which is looking at women in a society that is defined by a patriarchy and finding a place for women to fight against that patriarchy…” Leena Raudvee

How does one define Feminism? What is a Feminist? What does a Feminist do? How do you become a Feminist? These are just a few of the questions that we asked each other when presented with the challenge of performing Feminist culture. As self-proclaimed Feminists we have our individual narratives to answer our initial questions.

As Feminists of different generations and varied cultures we’re interested in answering these questions with specific reference to the ‘now’. Since the inception of a Feminist culture many theories have circulated, many discussions have been had, and we now feel that it is time for a re-defining and/or re-culturing of our understanding of Feminist culture as it exists today.

As performance artists, a core element in each of our practices is the act of collaboration. With this in mind, we are taking an investigative approach and putting out this open call for responses to our key question: What instructions can you give for a Feminist action?

We ask that you provide us with instructions for a Feminist action that we may choose to interpret and perform.

Please send instructions to Leena Raudvee and Erika DeFreitas at the following email address: erika.leena@gmail.com with the subject: Action.

Our documentation of performed actions will be on exhibit at XPACE Culture Centre during the WIAprojects symposium Performing Feminist Culture, held on November 6, 2010.

Along with the Feminist History Society recently formed in Central Canada and out to British Columbia, it is thrilling to see Feminism moving beyond the F word. Check out http://kootenayfeminism.com

WKWA has just received a small mentoring grant to get some help to get some of the wonderful audio and video material they have onto their website.

The West Kootenay Women’s Association presents:
IMAGES – Kootenay Women’s Paper: A Primer on Feminism (1973-1991) Edited by Dr. Marcia Braundy - Format: CD
Nineteen years of IMAGES - Kootenay Women’s Newspaper represents the early writings of many of British Columbia’s prize-winning women authors and artists as they struggled to develop their personal and political perspectives on Second Wave Feminism. It documents the struggles for effective and satisfying economic, social and political lives for women in rural BC, and links arms and words with women from around the world, telling their stories along with our own. Theme issues address the major challenges of our times: Aging, Health, Machinery, Sexuality, Reproductive Rights, Working, Lesbian life, Mothers and Daughters, The Arts, Media, Feminism, Technology, Violence Against Women, Travel and Relationships. “Mixed” issues covered local, regional and national news from feminist perspectives.

IMAGES, produced by volunteers, and supported solely by advertisements, subscriptions and donations, is a record of small business development in the Kootenays from 1973 to 1991. The creative advertisements for both male and female owned businesses provided long term financial support. It is a record of the challenges, successes, failures and learnings of social, political, educational and economic development in the West Kootenays over a significant period in Southeastern British Columbia development. The quality and thoughtfulness of the writing is some of the best produced in Canada during the time, and the WKWA are thankful to the BC150 Heritage Legacy Fund for funding a project to bring this historical and still quite relevant journal back into the public eye. WKWA has been told by young women who volunteered on this project of the essential importance these articles have to current issues being faced by them.

85 issues of the paper were scanned, digitized, made readable and searchable, and placed on a CD, which is being made available to individuals ($20) and institutions ($50) in continuing efforts to support the Nelson Women’s Centre, the oldest rural women’s centre in Canada, still an activist and going concern.

Producing IMAGES – A Primer on Feminism is the first phase of a larger project documenting and digitizing the development of 2nd Wave Feminism in the West Kootenay area of British Columbia, a veritable hotbed of feminist activism. From Canadian founders of the Voice of Women, Project Ploughshares, and Canada’s first rural women’s centre, through B.C.’s first Women’s Festivals, early women’s economic development initiatives like EMMA’s Jambrosia, and founding the National Network for Women in Trades and Technology, documents and reports, posters, interviews and soundtracks will, over the next year, be launched as www.kootenayfeminism.com, and connected to the Nelson Women’s Centre website, freely available to the public, thanks to the Barber Historical Digitization Project at the University of British Columbia.

wkwomyn@netidea.com with IMAGES in subject line, and send a cheque for