Through a Glass Lightly
WIAprojects @ 1313, Window Box Gallery
Artists’ perspectives as persons with disabilities inform a vision of the world which can be unique - personally, visually, politically .... The series exhibition, Through a Glass Lightly induces the Window Box Gallery to act as a looking glass site that reflects back to the viewer changing images of the world - the seasons and times of day/night play over the window surface altering the images within. This exhibit invites others to see not only slightly askew but anew! To see our "acts" as creative offerings. 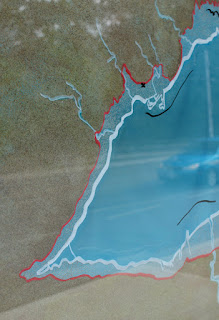 Fragments from past work are framed by this map from a 2012 showcase project about the fluctuating Lake Ontario shoreline. It forms part of Floodgates, a project which started over 20 years with memories of dam floodwaters flowing through bushes and living in Toronto near the post-Ice Age Iroquois Lake shoreline. Struggles to reclaim material for art, while industrial economies careen through environmental crises, is evident in past sculptures and an online project, Tender Loving Stuff. Following 2015 radiation and chemotherapy, bouts of fatigue underscored the energy toll that neurological differences have always exacted. Water health and this showcase series theme of women aging with disabilities determined the choice to include nuclear medicine and power.

Tegan L Smith’s current work began with dyslexic measuring quirks and widened to the metric system, world measuring projects and unusual navigation methods. She studied at the University of Saskatchewan, Saskatoon and has an MFA from York University, Toronto. She has exhibited work in Canada as well as Italy, the USA and Japan. Recently she participated in her first artist residencies abroad in Scotland and Spain.

This wood mounted digital print is from a mixed media collage that I recently created showing the circulation system of the human body divided into 3 parts.
Born with a congenital heart defect meant several major surgeries were needed throughout my life; I look to examine how times of trauma especially in childhood can alter an individual. At age 12, I was given Hep C through a blood transfusion. Surgery has changed me physically for both better and worse, and mentally I had to come to understand that my body would never just be mine, it has been opened and changed by others and will always need intervention. My relationship with my own physical form is part fear, part awe and pride and dislike. I am very scarred, and each scar tells of an instance I would have to re-think my physical being. Each trauma forced change in my understanding of what it is to be able bodied. 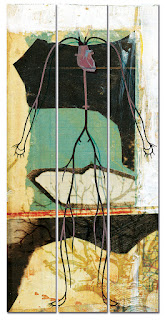 Natalie Piper graduated from the Ontario College of Art and was instrumental, as committee member, in assisting its shift to a university. She also holds a master’s degree in Printmaking from Maidstone, Kent and taught for years at the institution in printmaking, bookbinding and life drawing. Natalie was the first woman digital illustrator for Getty Images in Camden, London and went on to start her own company Art Division, a web and graphic design company in Wimbledon, UK. As a visual artist, she creates in digital new media and, after years of a successful design career in the UK, she has returned to Canada and to developing her art practice. She continues to work as a graphic designer in Inkfly, her own Canadian company.


Video/Installation: Before the 37 Trillion Pieces Get to Sleep

Tari Ito is a feminist performance artist who lives in Tokyo, Japan. Seven years ago, Ito was initially diagnosed in 2014 with a neurologic disease called SMA. But in October 2019, it was announced that, as a result of genetic testing, she now has ALS. The disease initially progressed rapidly and as a result she has become confined to a wheelchair. Ito has had to necessarily review the creative expectations she has of her own body. After a four year break from performance, Ito took part in LIVE Performance Art Biennale 2019 with the North American premiere of Before the 37 Trillion Pieces Get to Sleep, a new project which addresses the crucial reality, and the inhabitants fear, of the “invisible” presence of residual radiation in Fukushima following the March 11, 2011 nuclear disaster. This 2019 performance marked Ito’s return to the Western Front three decades after her first performance in 1990. The Window Box Gallery exhibit marks a similar span of time as she returns likewise to Toronto with this exhibit/video. 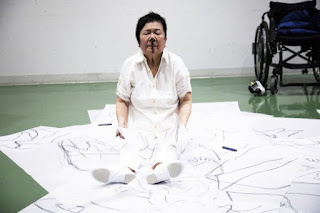 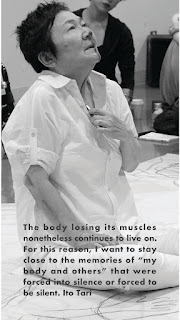 My dirty laundry…
My dirty laundry, as installation, reflects on two of my most appalling experiences with the medical industrial pharmaceutical complex. It is an ambivalent response as the system that rescued me is the same system that undid me.
The psychiatric drugs that I fought against taking to halt my post partum depression induced a psychotic break. My resultant suicide attempt, as a result of this break, left me with one functional limb and a wheelchair. I continue to consume psychiatric drugs; I have not been able to roll away from them. They continue to interrupt my thinking and functioning and making processes.

Elaine Stewart immigrated to Canada from Scotland at a very early age and has worked with threads and fabrics for much of her life. Her family history is bounded by textiles. When older, she started at the Toronto School of Art and began to incorporate textiles, threads, and found materials into her practise. She focusses on both movement- and mind-structured-by-disability supports in two- and three-dimensional installations.
Elaine appreciates the textures that textiles provide, whether it be rags wrapped in wire, muslin ripped, torn and dyed a multitude of colours, or thick and thin threads; they add an organic, emotional edge to her work.
She has participated in Present Tense, Inclusive Arts London, Bridging Forward Accessible Arts Festival, and showed her work online for The Gynocratic Art Gallery. She also participated in Project Creative Users at Artscape Youngplace during Nuit Blanche and Community Creates Change at Wychwood Barns Gallery.
Elaine Lives in Toronto.